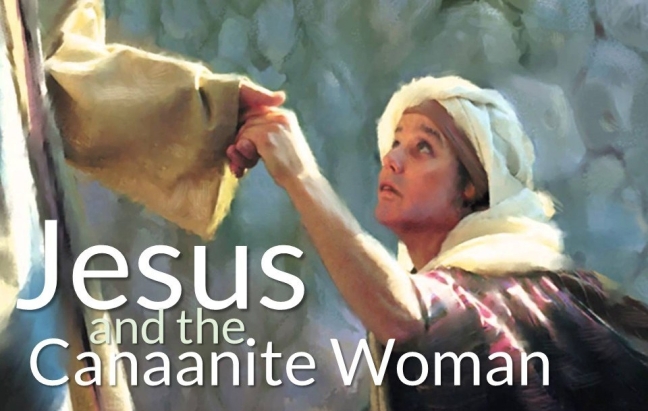 Leaving that place, Jesus withdrew to the region of Tyre and Sidon. A Canaanite woman from that vicinity came to him, crying out, “Lord, Son of David, have mercy on me! My daughter is suffering terribly from demon-possession.” Jesus did not answer a word. So his disciples came to him and urged him, “Send her away, for she keeps crying out after us.” He answered, “I was sent only to the lost sheep of Israel.” The woman came and knelt before him. “Lord, help me!” she said. He replied, “It is not right to take the children’s bread and toss it to their dogs.” “Yes, Lord,” she said, “but even the dogs eat the crumbs that fall from their masters’ table.” Then Jesus answered, “Woman, you have great faith! Your request is granted.” And her daughter was healed from that very hour.

This has always been a problem text for believers. The disciples of Jesus are rude, racist, and impatient. Worse still, Jesus himself seems cold and unkind to put it mildly.

In considering this last interpretation I was reminded of the often-used phrase “white privilege” and its implications. While it’s not a sin to be one who has white skin (who can choose that?), it may be a sin to continue to deny, defend, or ignore the obvious implications of often being at a great advantage to one whose skin is of color. In the same way, can we see Jesus as representing a male of his historic context – while still “growing in his faith and obedience”? (see Hebrews 5:7-10)

My intent is not to attempt to solve this issue. Regardless of which way you understand Jesus in his deity and humanity, or choose to deal with this difficult conversation he had with the Canaanite woman, I think it’s clear that certain things can be learned from this text:

(the above is a summary of the message shared during our JCC Zoom Worship session on Sunday, August 16th…)