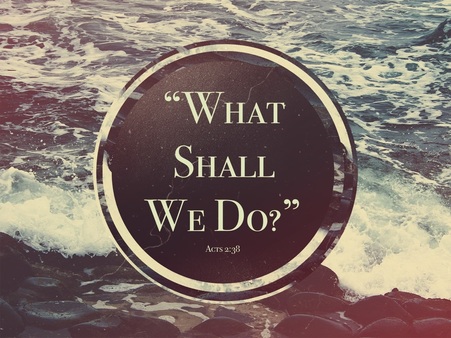 37Now when they heard this, they were cut to the heart and said to Peter and to the other apostles, “Brothers, what should we do?” 38Peter said to them, “Repent, and be baptized every one of you in the name of Jesus Christ so that your sins may be forgiven; and you will receive the gift of the Holy Spirit.
39For the promise is for you, for your children, and for all who are far away, everyone whom the Lord our God calls to him.” 40And he testified with many other arguments and exhorted them, saying, “Save yourselves from this corrupt generation.” 41So those who welcomed his message were baptized, and that day about three thousand persons were added. 42They devoted themselves to the apostles’ teaching and fellowship, to the breaking of bread and the prayers.
43Awe came upon everyone, because many wonders and signs were being done by the apostles.
44All who believed were together and had all things in common; 45they would sell their possessions and goods and distribute the proceeds£ to all, as any had need. 46Day by day, as they spent much time together in the temple, they broke bread at home£ and ate their food with glad and generous hearts,
47praising God and having the goodwill of all the people. And day by day the Lord added to their number those who were being saved.

In the first part of the chapter, we are told about how the Holy Spirit came upon the disciples, giving them the ability to speak in languages they did not know.  Emboldened, they spoke about the mighty deeds of God, and Jews from everywhere were hearing the message in their own languages.  The people were amazed, although some scoffed and claimed that they were drunk.

Peter stands and explains that this is the fulfilment of what the prophet Joel wrote over 400 years in the  past — That before the Lord’s judgement comes, everyone who calls on the name of the Lord shall be saved.  Peter goes on to explain that Jesus of Nazareth was the long-awaited Messiah and that as proof, He performed great deeds of power, wonders and signs, and yet the Jews handed Him over to the Romans to have Him killed.  But God raised Jesus from death and he now sits on the right hand of God.

Coming to today’s passage, upon hearing Peter’s message, people realized what they had done, and ask the disciples what they should do.  Peter’s response was to repent and be baptized and they will be forgiven and receive the gift of the Holy Spirit.

Those who welcomed this message were baptized — there were about three thousand of them.  They devoted themselves to the apostles’ teaching, fellowship, breaking of bread and prayers.  They took care of each others’ needs and had glad and generous hearts, and praised God.

There are points that Peter makes that are also useful for us when given the opportunity to share the gospel of Jesus Christ:

In the last section, we see how a community of believers behaves:

The message Peter gave was not only to those who were there and witnessed the power of the Holy Spirit.  In v. 39 Peter says, “For the promise is for you, for your children, and for all who are far away, everyone whom the Lord our God calls to him.”

Although we live in a different time and place than is described in Acts 2, the same Holy Spirit is with us and the same message is still relevant, and the same way to live is still how we as believers can witness to the world about Jesus Christ.

(the above is a summary of the message shared with us by Shun Takano during our zoom worship session on February 14th.)