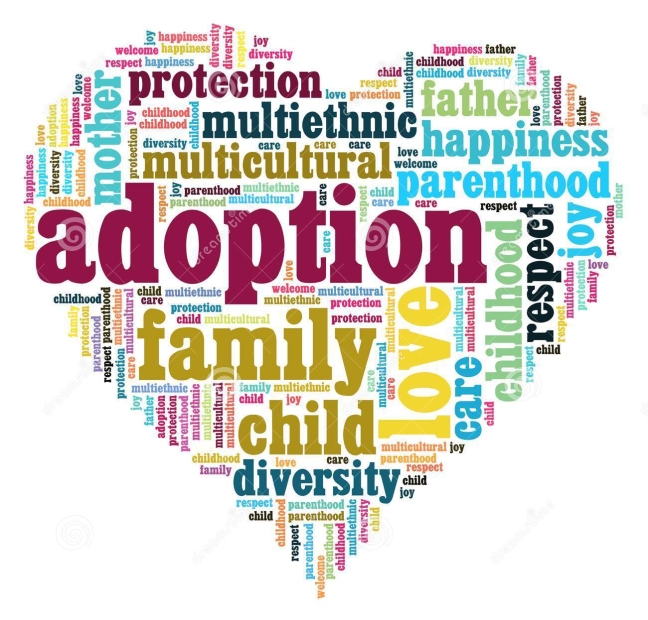 Therefore, brothers and sisters, we have an obligation–but it is not to the sinful nature, to live according to it. For if you live according to the sinful nature, you will die; but if by the Spirit you put to death the misdeeds of the body, you will live, for those who are led by the Spirit of God are the children of God. The Spirit you received does not make you slaves, so that you live in fear again; rather, the Spirit of Adoption that you received brought about your adoption to sonship.  And by him we cry, “Abba, Father.” The Spirit himself testifies with our spirit that we are God’s children. Now if we are children, then we are heirs–heirs of God and co-heirs with Christ, if indeed we share in his sufferings in order that we may also share in his glory. Romans 8:12-17

Our text for today includes the word “adoption” at least in most English versions. Paul even refers to the Holy Spirit as the “Spirit of Adoption”. What does he mean…and what can we draw from this analogy? Many of you have experienced the adoption of a child in your own families. Our family, too, has experienced adoption. We are a “mixed” family of both adopted and biological children. So when Paul uses the word adoption, my ears perk up and I am interested in the way in which he describes our relationship with God using this word.

Three of our four children have come to us through adoption. Those of you who are also adoptive parents will immediately recognize the brief conversations below:

In all of these cases the real issue revolves around how one defines a family, or prioritizes various things. Are DNA and our biological connection more important and deeper than other familial relationships, such as adoption?

As we proceeded with our international adoptions through the Japanese family court in our prefecture, we became aware of one important fact. In Japan, there are two distinct types of adoption. One is called “ordinary or common adoption” (futsuu yoshi-engumi), and the other is called “special adoption” (tokubetsu yoshi-engumi) In Japanese culture it’s not unusual for couples who can’t have children of their own to simply adopt a nephew or niece – an “extra” child of one of their relatives. It’s usually a boy and this child would come to carry on the family name and take over the family business, etc. This kind of ordinary adoption is quite simple to do – requiring merely a change on the citizenship register of all involved. It can also be quite easily undone if things don’t work out as smoothly as one wished. With a “special adoption”, it is a completely different process. In this case, the child cuts ALL ties with the original family, including any right of inheritance, and actually joins a new family, becoming a “real” child with all the rights of inheritance – an actual heir. Of course, we realized that this is the only kind of adoption that we have in our American system and so we were required to follow through with a “special” or “tokubetsu” adoption.

1.  Brings us INTO a new relationship with God (verse 15)

A discussion of our inheritance being both suffering and glory… would be another entire sermon! But back to adoption – if we are adopted, and become REAL brothers and sisters, and share the SAME Abba / Father – we are no longer able to view brothers and sisters of other nationalities, ethnicities, political divides… as somehow OTHER – not connected to us. We are all a NEW family, a real family, a tokubetsu adoption! And if we extend that circle to include not just other Jesus-followers, but all humanity – the implications become profound. How many of our present wars and struggles would become impossible if people truly understood that with the same heavenly father, we are all siblings?

(the above is a summary of the message shared on May 30, 2021 during our zoom worship session.)