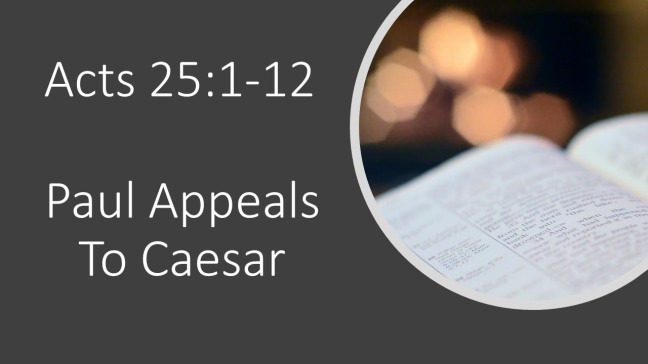 After Paul made his case to Felix, Felix kept Paul in custody, but gave him some freedom and allowed his friends to come and see him and take care of his needs. Felix was familiar with Christianity, and his wife was Jewish, and they would speak with Paul about faith in Jesus Christ. Paul also discussed things like justice, self-control and the coming judgement, which frightened Felix. Felix kept Paul imprisoned for two years, hoping that Paul would give him money, but that never happened. Then Felix was succeeded by Festus.

Festus travels to Jerusalem and the Jewish religious leaders give him a report against Paul and ask Festus to have Paul brought to Jerusalem. They were planning to ambush Paul along the way and kill him.

When Festus returned to Caesarea, the Jews also came down from Jerusalem, bringing many serious charges against Paul. Paul defends himself and declares that he has committed no offense against the Jewish laws, the temple, or against the emperor.

Festus asks Paul whether he wants to go to Jerusalem and be tried before Festus on these charges. Paul wisely states that he wants to appeal directly to the emperor, and Festus and the council agreed that this should be so.

After this, King Agrippa and Bernice arrived in Caesarea to welcome Festus, and Festus decides to consult with Agrippa. Agrippa wants to meet and hear Paul, so that was arranged, and Paul defends himself, as well as giving his testimony about Jesus Christ.

In Paul, we see someone who is totally committed to doing the work that the Lord has assigned to him. Back in Acts 9, the Lord reveals the plan He has for Paul to Ananias – To bring Christ’s name before Gentiles and kings and before the people of Israel.  As Ananias was ministering to Paul, he informed Paul what his role is to be for the Kingdom. Paul also was told that there will be much suffering as he goes about doing this work.

From the beginning, Paul was informed that this was not going to be an easy life for him. In fact, Paul recounts his experience in 2 Corinthians 11:24-27.

Paul continued to preach that Jesus Christ was the Son of God and the Savior of the world, knowing that this would put him at odds with people in power that could do him harm. He witnessed in front of angry Jewish mobs, Jewish religious leaders who determined to kill him, Roman governors, and Roman appointed kings. Knowing that if he continued to witness for Christ, things would not work out well for him – yet, he continued to preach.

What made Paul such a great witness for Christ? It was his faith in Christ, his dependance on the Holy Spirit, and his knowledge that he was created to do Kingdom work. He understood that if he put his personal desires and goals aside and devoted himself to doing the work the Lord appointed to him, that he would find true joy, peace, and meaning for his life, as well as the assured promise of eternity with the Lord.

What about us? If we were told that if we accepted Jesus as Lord and Savior, there might be suffering and your goal in life will change from chasing your own dreams to doing the Lord’s work, would we have accepted that? Well, Jesus did tell us that – It was not just to Paul.

It is written in Matthew 16:24-26 24Then Jesus told his disciples, “If any want to become my followers, let them deny themselves and take up their cross and follow me. 25For those who want to save their life will lose it, and those who lose their life for my sake will find it. 26For what will it profit them if they gain the whole world but forfeit their life? Or what will they give in return for their life?  This is recorded in the other gospels also.

Paul encountered situations where there was injustice and hatred and ridicule. And yet, Paul didn’t bother trying to strike back or avoid these encounters. Each time, he took it as an opportunity to tell people about Jesus Christ and how he came to believe.

The sufferings that we might encounter in trying to do the Lord’s work are probably nothing compared to what Paul went through. Yet, the temptation to avoid hardships or difficulties will be there, unless we rely upon the help of the Holy Spirit.

The next time we are feeling overwhelmed or timid or reluctant about doing the Lord’s work, remember Paul and how he lived his life for the Lord. Also remember that the same Holy Spirit that helped Paul is also living within us.

True joy in this life is going to come not from chasing our own dreams, but by being in the will of the Lord Jesus.

(The above is a summary of the message shared by Shun Takano during our worship on October 23,2022.)